Getting ready for Friendsgiving, I selected my attire. I would wear a green vee-neck Tommy Bahama sweater.

I’d been thinking about my clothes for several previous days before that. The shirt I’d worn earlier that day had been bought in 1998. The one worn the day before was also bought in the late nineties. My shirts, sweaters, and underwear seem to last a while. My jeans and shoes don’t.

I was thinking all of this because I was thinking about cats. I’d moved up with two in 2005, Pogo and Scheckter. Pogo died the following year, killed by a car. His ashes are in our bedroom.

We moved to this new house in 2006, now with just Scheckter. Within three months, we also had Lady and Quinn.

Lady was a rescue. A man I knew through the coffee shop had rescued her. I used to buy him coffee and bagels, and donate cat food to him. Lady had been living behind the movie theater. He started feeding her but it took a year to earn her trust. Now his health was falling and he had to move. Moving meant giving up five of his six cats. He could take one. He had homes for four more. Only Lady, skittish and shy, didn’t have a home.

Then, on a cold, windy midnight, I’d gone out to call Scheckter in. Quinn instead turned up. Since it was a nasty night, we gave him food and shelter. We hunted down his owners and returned him to them, but he kept coming back to us. They moved, leaving him behind.

So, for seven years, it was Scheckter, Lady, and Quinn, three wonderful cats who got along well. 2013 found us losing Scheckter, and then Lady, leaving just Quinn.

Not to worry, though. Three more cats, Tucker, Boo Radley, and Papi (a.k.a. Meep), found us. We were a four-cat family for a while, even though Tucker, Boo, and Papi often fought. As Scheckter and Lady were dying, Tucker showed up and begged for food and help. We tried to find his people but no one claimed him. He had medical issues which took a few years and some money to resolve. Then came Boo, also begging for food, and also unclaimed. Next was Papi.

Quinn remained the sweet lord of the house. He was diagnosed with lymphoma in this past September and died two days before Thanksgiving. He had a strong will until his last four days. I tried keeping him comfortable and helping him, but he finally told me, I’m done. I didn’t want to accept it, but you can’t argue with some things. I cried and let him go.

We’re back down to three cats. They get along better, although there are daily hissing encounters. I couldn’t help but thinking as I dressed on Thanksgiving, I wish my cats would last as long as my clothes.

I’ve been suspicious lately. It’s just the things that’ve been happening. I feel like I’m being set up.

All this in less than two weeks. It’s more than I can take. I’m waiting for the other shoe to drop, if you know what I mean. 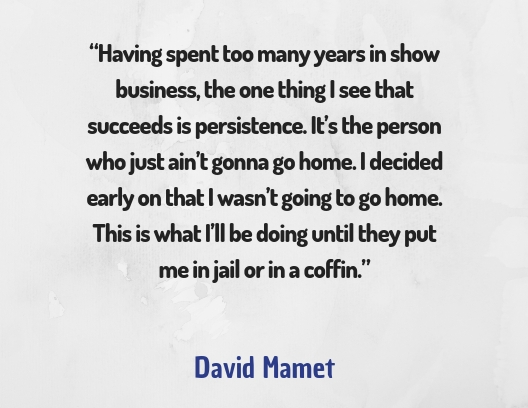 Rounding the corner, pushing himself to walk hard and fast, he almost ran into another person. The other guy seemed to be doing the same thing as him. As both jerked back in reaction, they looked at one another in the face.

Quickly, the other man turned and strode away. As he gaped at the man’s receding back, he thought, that can’t be Steve McQueen. Steve McQueen died a long time ago, like decades ago, or something, from a heart attack. He remembered it because McQueen and his father had been born in the same age. McQueen’s death, when he was just fifty, scared his father.

He wished he could call his father and talk about it, but his father had died the year before. As he mused on that, wondering if it was McQueen’s doppelganger or maybe a son, he almost ran into another man.

“Excuse me,” the other man said with a smile.

He jerked back in shock. “Johnny Carson?”

The man put a finger to his lips with a furtive grin. “Shh. Mum’s the word.” Then he turned and hurried away into the brightening day.

Flooftzy (floofinition) – a housepet who is eccentric, scatterbrained, easily confused, or does silly things.

In use: “Demonstrating new levels of being flooftzy, the little tabby cat attacked the garbage can’s swivel lid, beating it as it went around and around.”

He’d known Taylor for a while and knew he had a son. Now he was meeting him for the first time.

Son was taller than father, but much more slender and quieter. Son was also about half of Dad’s sixty-five years. The years count for a lot.

Observing the son, he wondered and asked him, “Are you like your mother?”

Conversations erupted, and the questions that erupted from that answer couldn’t raised.

I was streaming Robert Palmer’s cover of “Give Me the News (Doctor Doctor)” from 1979 this morning as I attended household busy work. Various reasons prompted me to stream it, and it to do with cats and coffee. Go figure. I always enjoy the energy of Palmer’s version, which was much more lovely than the original.

There it is, the bolt informing you that, holy shit, it’s almost December. December begins this Saturday.

If you’re like me — and I hope you’re not — you’re agog with amazement that November is almost empty. Hell, 2018 has almost spent its calendar, and here I am, still dragging myself forward.

But, you know, take the positive, I am moving forward. It doesn’t go as fast or smoothly as desired, dreamed, or hoped for, but I keep creeping forward.

What will the end of November mean? Well, in some ways, it means a re-assessment. It means, for me, an agnostic in America, enduring the holidays, which sometimes means enjoying myself, respecting others’ beliefs and traditions, and otherwise, doing what I do, except there’s more food and music.

Likewise, the end of the year means some searching, but I search almost every day, looking for truth, hope, justice, luck, love, something to eat, answers for puzzling questions, etc. So, really, nothing, but because of where I live and who I am, everything.

I don’t know what was up with the gingerbun this morning, a.k.a., the orange feline floof known as Papi, but also called Meep (in appreciation of the meeping sound he uses for a meow).

I’d fed him and let him out of the house. An hour later, I checked on him to see if he wanted in. He wasn’t around the back door. As I headed for the front door, I thought I heard a thump – perhaps the sound of a cat whacking the door with his paw – at the back door, so I reversed course. Yes, there he sat, waiting for the door to open.

Phlooommm, a bright orange streak galloped past me. In wonder, I turned and watched him make a circuit of the living room, dining room, and kitchen, come back to me, and stop, looking up at me with his tail standing tall. I swear he was grinning. As I closed the door, I said, “Aren’t you in high spirits?”

Phlooommm, Papi bolted away, leaping up onto dining room chairs and off, sprinting past Tucker, the house lord, spinning on the hardwood floor, and then racing back to me to slam to a grinning halt in front of me again.

Yes, he replied, tail up, rubbing against my leg. Then, phlooommm, he flashed away.

I awoke early, but stayed in bed. The muses were already up, and were in a dictating mood.

They were working on the next novel in the Incomplete States series. The Final Time is the sixth book in the series, which is about five more than I’d planned.

Apparently, while I’d been sleeping, I’d been thinking over the novel’s concept challenges. While doing that, my muses engaged with my subconscious. Net results were that they’d figure out the issues and objections bugging me yesterday, and had created action and dialogue.

After staying in bed, I heard the muses out, and then got up, went into my office, a.k.a. the snug, powered up and typed. It wasn’t a lot, ten free-flowing pages, about eighteen hundred words that must now be edited, but that manner of spontaneous writing inspires me. It’s the best kind of writing, because it seems like it’s a writing zone. The book seems powerfully tangible. The process leaves me breathless and energized with excitement.

There’s always a caveat to this. Just as I have a few days in a dark trough roughly once a month, I also crest a summit of positive energy once a month. I endure the dark trough. It ain’t fun. During that time, I feel bitter. Drenched with self-pity, I despise myself and the world. Sometimes, when it’s really dark, I wonder WTF do I ever write? What is the point of this crap? Why do I put myself through it? Surely it’d be easier not to be a struggling writer, but someone who lives the retired life, traveling, puttering around the house, going to the gym three mornings a week, taking in movies, and so on. That appears to be what my retired friends do. It sounds appealing when I’m sunk in the dark trough.

But this summit? Man, it’s a joy. I accept it and run with it. Sometimes, though, that positive energy gets carried away, and the promises that I make during this time are difficult to fulfill when I crash into the trough. And again, that’s my life.

The trick with the mood extremes is to write no matter what I’m feeling or experienced, and accept that what I write may be great or terrible in either state, but it must be edited later.

Okay, got my coffee. Time to edit and write like crazy, you know, at least one more time.