His dagger of self-awareness is a sharp blade and ready at hand. He plunges it into himself again and again to prove he knows who he is. 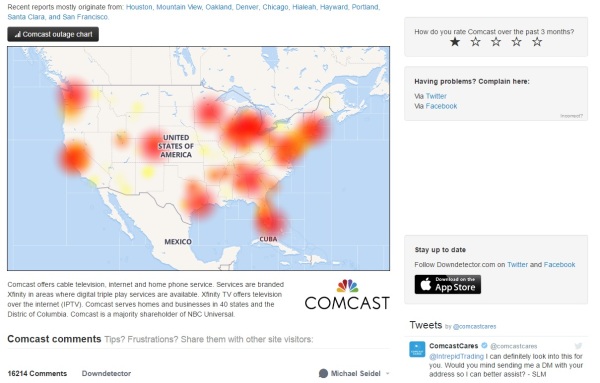 My dependencies sicken me.

Here I am, deploring the deplorable state of the net as it drifts in and out of connectivity.

The first thing that jumps to mind is, WTF? Then, of course, I ask myself, is it me? Is it my system? Everything is checked and reset.

But problems continue. It started last Friday and has gone on and on. Finally, Monday, I checked downdetector.com and other sites. They verified, yep, we got problems. You can see the spikes.

More of it today.

Naturally, the Internet corollary to Murphy’s law specifies 1), your net connection will drop at the ideal time to curtail your momentum, and 2), just when you think it’s all fixed, it will leap up and bite you in the ass one more time.

Because of the commerce implications of outages, you probably won’t know what’s going on for a while. Connectivity, latency and response times equal sales and advertising revenue. Amazon owned up to its error last week because it was human error, something that is less likely to scare off customers than hardware and systems failures where they’re scrambling to figure out what the hell has gone wrong.

This duo began recording and performing a few years ago. I didn’t know Marian Hill was a duo. I thought, “She has a nice voice.” The song, ‘Down’, has unusual and interesting conflicts and contradictions. The piano is generally soft, tentative and mellow. The singer sounds distracted, like a person might sound as they observe another and try to connect with them, but the word images are immediate. She’s asking if the other is down as she describes a dance scene at a club. There seems ambivalence about whether she’s asking if the other is down with going out and dancing, joining the others, or down, as in a depressed emotional state.

I like all that. I’d never seen this video before today. Their intro explains some that I researched after singing the song to myself yesterday.

Here is ‘Down’ from 2015. Hope you enjoy streaming it in your head as you walk around.

Dreams have been boring of late.

I was reconciling with someone who’d angered me. I held my anger for a long time. Now I was being persuaded for the betterment of some project to make up. I didn’t want to but reluctantly agreed.

My seconds and I met with his seconds under an Interstate overpass. It was a dark, wet day. The terrain was brown dirt and highly sloped. Huge round pale pillars supported the highway. Interstate traffic thundered and roared overhead.

We approached one another. Words which I couldn’t hear were exchanged. I decked him.

Then, a voiceover: “Now let’s do it from his point of view.”

I was the other person. I knew I’d wronged me. I was sorry. I accepted that I would probably hit me. I walked into it knowing it would happen but accepted that it would.

We were working on a project. Dad was involved. I’d done great on it. Everyone was congratulating me on my outstanding performance. I was pleased and excited but also uncomfortable with all the attention.

A celebration was set up. I was told I’d won a prize for my performance. A big white decorated sheet cake was brought in. People began taking pieces. I couldn’t get to it and get any. It was going quickly.

A new silver BMW convertible was brought in. I was confused as to whether it was my prize. I thought it was but others got in it to take it for a spin.

I was left waiting for my cake and my prize.

I was at a new military assignment. I’d just completed a prestigious assignment and had been recognized for my contributions. My OIC was a female, someone I didn’t know. She was young and I was teaching her how to set things up. Two other controllers were assigned to the location. A new one had arrived.

I was explaining processes to the new controller and explaining to him that one of the others – I think I gave a name – would be assigned to him to train him. Meanwhile, I filled out forms as templates to help him correctly process information.

I was almost done. The newbie was preparing to leave. So was I. The OIC suggested that I get an emergency number from the newbie. “Good idea,” I agreed, and called to him for one even as I thought, that would have already been done.

“How do we reach you?” I asked him. He was twenty to thirty yards away. “Do you have an emergency number?”

Walking back toward us, he replied, “I was born in Iowa.” He then began to tell us about his childhood.

The OIC and I were confused. Why was he telling us this?

So – it seems like these dreams reflect many facets. Of being recognized but not rewarded. Of needing to make up with myself and forgive. I don’t know what I’m forgiving. Past errors?

There seemed also an element of being confused about what was expected of me.

Catlias: the other names by which a cat is know.