Another friend has passed away. He beat cancer four years ago. Earlier this year, he said it had returned. Last time I saw him, he looked wan, gaunt, tired. He had beautiful brown eyes which glint with humor, mischief, and intelligence. All were absent that last time that I saw him. He didn’t speak much. He told us he was going to a family reunion in Europe. On his return two months ago, he told us that he was withdrawing from our weekly beer group meetup. I had a bad feeling.

But I’m not here to grieve. Grieving has worn me down. Death, sickness, and illness are all regular segments in the great cycle of life. Better instead to celebrate the friendships and love of these people who complete the circle and go on. We don’t know what they go on to. I just know what he’s left behind. I’m pleased that he took time to be a friend and join me to tip back a beer once a week and talk politics, philosophy, science, art, pop culture, music, and literature. He’d tell me about his life and his travels, how much he loved his father and sisters, what he and his daughter do as traditions, how proud he was of her.

I cherish those days and will as long as I can. And I will celebrate that such a person lived. My face still hurts with feelings of loss and tears sully my vision, but that’s me wallowing in self-pity that I lost such a friend. No more, no more. I will celebrate the human I knew and how he made me laugh, think, and wonder. And sometimes I’ll raise a beer and have a drink, and smile, as if he’s still there.

In use: “In many houses, the floofhub gravitates toward the home’s sunniest spots, depending on the weather, although wherever food is found often quickly becomes a floofhub.”

The Evidation website’s FAQs, contact information, and other details are on the page’s bottom. But each time I scroll down, more history of what I’ve done is brought up. The net is, I can never reach the page’s bottom. Exasperation reaches sufficient levels after less than half a minute of trying that I I throw my hands up.

Screw that. Things like that are so frustration. I have better things to do than cultivate more frustration coping with their poor design. 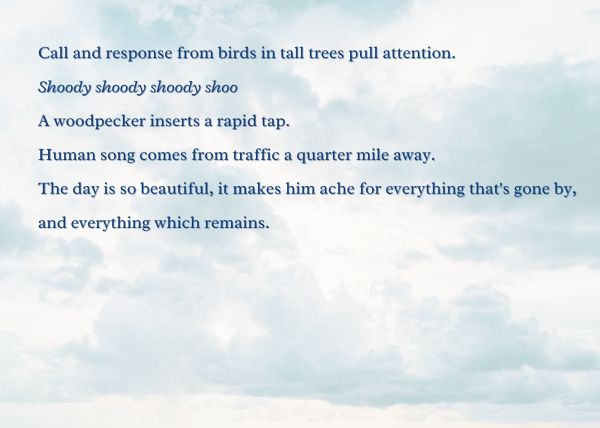 Seeing the date, he remembers forty-eight years ago. A Friday, he reported early to the enlistment place, signed papers and took an oath. His girlfriend came down to say good-bye at lunch time. An hour later, he got on his first airplane ride and flew across the country to San Antonio, Texas, to go to Lackland AFB and begin basic training. He was eighteen years old.

Sunlight highlighted a ridge of blue clouds in the eastern sky at 7:20 AM in Pittsburgh. Looks like another day of sun and clouds and temperatures in the mid 40s F to low sixties F. Autumn is taking a firmer hold as leaves acquiesce their green and yield to becoming other things. They’re good with going with the flow. Sunset arrives at 6:56 PM. Yes, we’ve broken the 7 PM barrier.

The shrinking daylight portion seems accelerated during my Pittsburgh time. Less than three weeks ago, I’d rise, go to windows, open blinds, and see the day beginning as the sun crested the east. Now, I wait for a few minutes before enough light announces that sunrise is coming.

I was out with Mom and a sister yesterday, escorting Mom to PCP and MRI appointments, and picking up ointment at a store. As she drove, my sister kept talking about road signs, particularly a large ROAD CLOSED sign sitting in some grass, surrounded by trees, on a road that no longer exists, which we used to take as a shortcut. Next thing I know, The Neurons have snuck “The Sign” by Ace of Base (1993) into the mental music stream. It’s a frothy song, a little techno, simple lyrics and an easy beat, which hooks minds with its simplicity. When I first heard the song, I thought I already knew it. Like many songs I feature here as theme music, I’d never seen the video before.

Short post today. Stay positive, test negative, get your boosters. Coffee and breakfast are calling. Have a better one. Cheers

We had a head in a jar. Dream knowledge told me it was a clay jar yet it was sufficiently clear to see the head inside. Not completely clear, but filmy and gauzy, as though petroleum jelly was smeared over it.

The head was in a cloudy pale-green liquid, and was male, white, and venerated. Now, on a pedestal, in the middle of scrubland, one other man and I had it. The other man was tall, spare, and mostly silent. Older, but I couldn’t give an age. He seemed to lack interest in the head jar.

I, though, tried singing to it. I thought that if we sang to it, it would sing back. Though the head’s eyes would look at me, and it would blink, it wouldn’t sing back. The other man wouldn’t sing either. That didn’t affect my mood. I remained optimistic and energetic. I then started prattling other ideas to him about the head in the jar. Maybe we should take it to a market and sell it. We could get good money for it. Or we can set it up in a square and I’ll ask others to sing with me to see if we could get the head to sing. I spoke to the head, asking it, what do you want us to do?

A hunter, armed with a compound bow and arrows, dressed in woodland camouflage vest, hat, and pants, came along. I quietly watched him. He saw the head in a jar on a pedestal, but went on, looking for animals to shoot.

The army came along, as expected. This was an army of the people. They walked, but didn’t march, in orderly rank and file. Most wore ragged clothing. All ages, races, and sexes were in it. My older, silent friend and I joined them, and the head in the jar was given to someone to carry. I was leading one large group, but in an unofficial capacity. On a road, we were supposed to keep up with the other groups but were going too slowly. Impatiently, I urged them, “Come on, we must keep up.” We’d been warned not to get separated because that would leave us exposed and vulnerable to attack. I saw the group ahead pulling away. I walked faster, thinking that my example might prod the group to walk faster. No; they instead dawdled and began chatting about trivial ideas. Exasperation building, I walked faster, becoming separated from both groups. But being in the middle, I could see them both and thought, if something were to happen to one group, I could turn to the other group to help.

We came to broad creek running low in a sandy, rocky basin. As I went to the water to drink, my group caught up to me. One said, “We know that women like you.” As I laughed at them, he continued, “We’ve all seen the way they react to you.”