In use: “Marty’s floofsons were perfect little replicas of him, black with white whiskers, a white diamond on their chests, and a long narrow tail.” 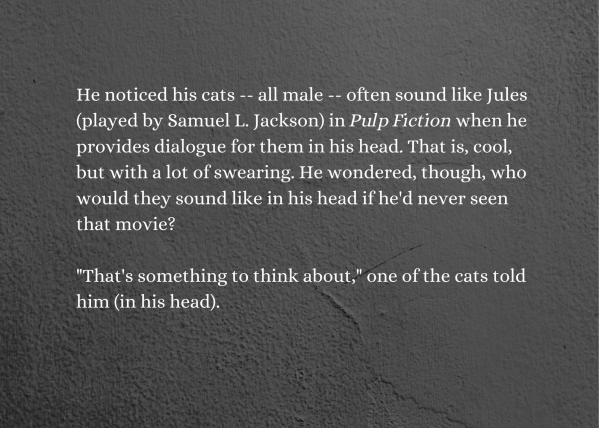 Sunday arrived like a Monday morning, on time and as expected. Cool and smoky.

Today is August 29, 2021. This is it. If you vowed to do things during August — clean cupboards, fly to the moon, bake a cake for a friend, write a novel — you better find the go button.

Sunrise settled its glowing blanket over our dried out brown and green valley at 6:33 AM. Sunset will be 7:49 PM. Our high temperature will be in the mid nineties.

We have a few warnings for you today for Jackson County, Oregon, including Ashland. Excessive heat warning, so don’t go outside. COVID-19 is still raging out here, climbing to levels that bring the national news services to the area to write stories about how bad it is in hospitals, so don’t go anywhere without your mask. Also, the air is rated unhealthy to extremely unhealthy so don’t go outside unless you must. Masking is suggested. Also, don’t exert yourself too much while you’re out there. A red flag warning has been issued for fires, so you know, be careful and don’t use power tools outside. Finally, there’s a drought still underway, so don’t waste water. Other than these stipulations and limitations, feel free to go nuts.

My mind started the morning with pieces of dreams. Most of them evaporated, leaving me to look at fragments and wonder what was going on there, sort of like we do when ancient ruins or old family photographs are found. Then, I thought about “Friends”. Have you heard about this? It was a television show about a gang of people – a brother and sister, and, well, their friends and room mates, and work and relationship entanglements presented in a humorous way. I believe it’s called a ‘sitcom’. On NBC in the states for a while. It’s also been on reruns sometimes after it went out of production. Anyway, I was thinking about the friends’ parents. Liked how the parents were written into their lives and relationships, and the actors who played the parents, but I was thinking mostly about Chandler’s father, played by Kathleen Turner.

Whew. Got that out of my system. I then checked out the landscape, thought about the situation, and concluded, Jesus, get me out of here. That prompted the Gospel song turned rock hit, “Jesus Is Just Alright” to kick off in the morning’s mental music stream. After re-acquainting myself with the DC Talk version and the Byrd’s version, I went back to the Doobie Brothers and pulled a recording of a live version off the net. The song doesn’t have many words. You can learn them quickly, I think. So feel free to sing along.

Stay positive, test negative, wear a mask as necessary, get the vax, and be careful out there. Here’s the music. You listen while I go get my starter fluid, aka, coffee. Also need to turn on the air purifier because it smells like smoke in here. Cheers