Floofpetitive (floofinition) – 1. Action or activity persistently completed for an animal, especially a pet.

In use: “His floofpetitive routine began every morning with fresh water — two bowls — followed by the feeding of the three feline princes, and then the daily morning love session (each demanded private personal time to be petted and doted upon), and the litter box cleaning. The routine was done again in the evening.”

2. An activity or motion repeated many times by an animal.

In use: “Whenever Pam sat down, her cat jumped up on her lap and commenced floofpetitive grooming of her face and hair, often employing her paws to hold Pam’s head still.” 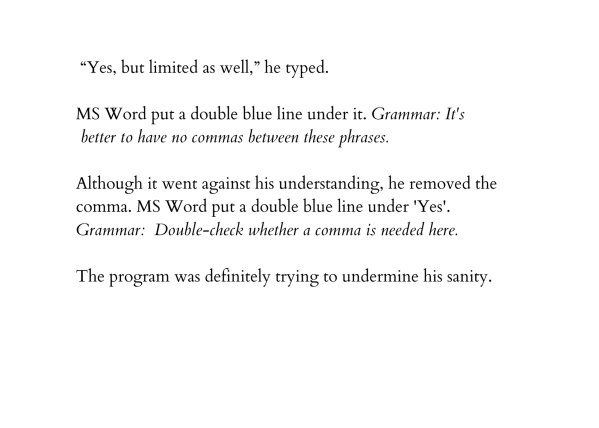 A group of us — all men of various ages, builds, condition, etc. — were gathered. A tense but excited current ran through us. We were being given an opportunity to race a Formula 1 car. These were not the current cars but vintage vehicles from the eighties. All of us could attempt to qualify but only twenty-three could race. My father was encouraging me to participate. I asked if he was, too, and he said, “No. Too old,” with a laugh.

I was in my early twenties and eager for the opportunity. An overcast sky murmured, it might rain, and a cool breeze kept us shivering. The track could barely be described as one. A run-down, overgrown place, we would-be racers walked about, attempting to clean off the track a bit, kicking off gravel, twigs, and leaves, removing old, rain-sodden black branches. Several drivers seemed much larger than me. Most were older. We chatted in knots as we impatiently awaited our chance. I was more knowledgeable about F1 than others there so I asked more questions and pondered things. One older, larger care took note and started asking me for advice to help him. Each time he asked a question, I asked, making a suggestion. When he thought the suggestion didn’t help, he wanted to take it out on me. I told him, “Look, I made the suggestions but you made the decisions. Own your decisions.” That seemed to take him back.

Meanwhile, I was becoming annoyed with the organizers. I understood that we were to be given cars randomly. Okay. Then we would practice, qualify, and if we were fast enough, we’d race. Okay. But the organizers were also issuing us old racing coveralls to wear, and helmets. Shouldn’t we have a chance to pick those out ahead of time and get used to them some? Why not? In my mind, the uniforms could be important because they could be too tight and hamper our movement, you know, like shifting gears and turning the steering wheel.

I was mentioning these things to other participants. None of them could answer it, of course, so I went in search of the organizers. The dream ended.

Today is Friday, August 27, 2021. Had some issues figuring out the day yesterday. Thought it was Wednesday. Had a Wednesday vibe. My wife’s comments abetted the Wednesday vibe. But it cleared up. I’m flying right now. Because, you know, it’s important what day of the week it is…isn’t it? Well, that’s how I was raised. Chores, school, vacations, holidays, work, it’s all built on the calendar.

Sunrise was at 6:31 AM. Sunset will come at 7:53 PM. Temperatures will range into the low 80s F today. They claim that our air quality is good today – first time it’s hit that mark in weeks – but the looks and smell don’t align with a good reading. I kept the kitties in and the doors and windows closed.

I’ve been thinking about the 1900s today. Started with wars. Progressed to a pandemic. Then the dust bowl struck. Obliterated millions of acres and displaced families. Thinking of all of that due to comparisons with now. The 2000s. Started with war. Then COVID-19 struck. Half of the western U.S. is suffering drought and fire. (Might be a little hyperbole there.) Thousands are being displaced.

Also been thinking about the Rolling Stones. Of course. Watts, their drummer, passed away. Long life. I think he would say he had a good one. Better than many, for sure. His passing has prompted me to listen to Stones music. A universe of Stone songs are out there. I’ve used many favorites as theme music already. What to do? How ’bout “Living in A Ghost Town” from last year. Fits the general mood. Smoke casts a ghostly pall over my world. COVID-19 lockdowns and smoke slash unhealthy air forces cancellations. Businesses are closed or hours are reduced. Activity slumbers. Why not, right?